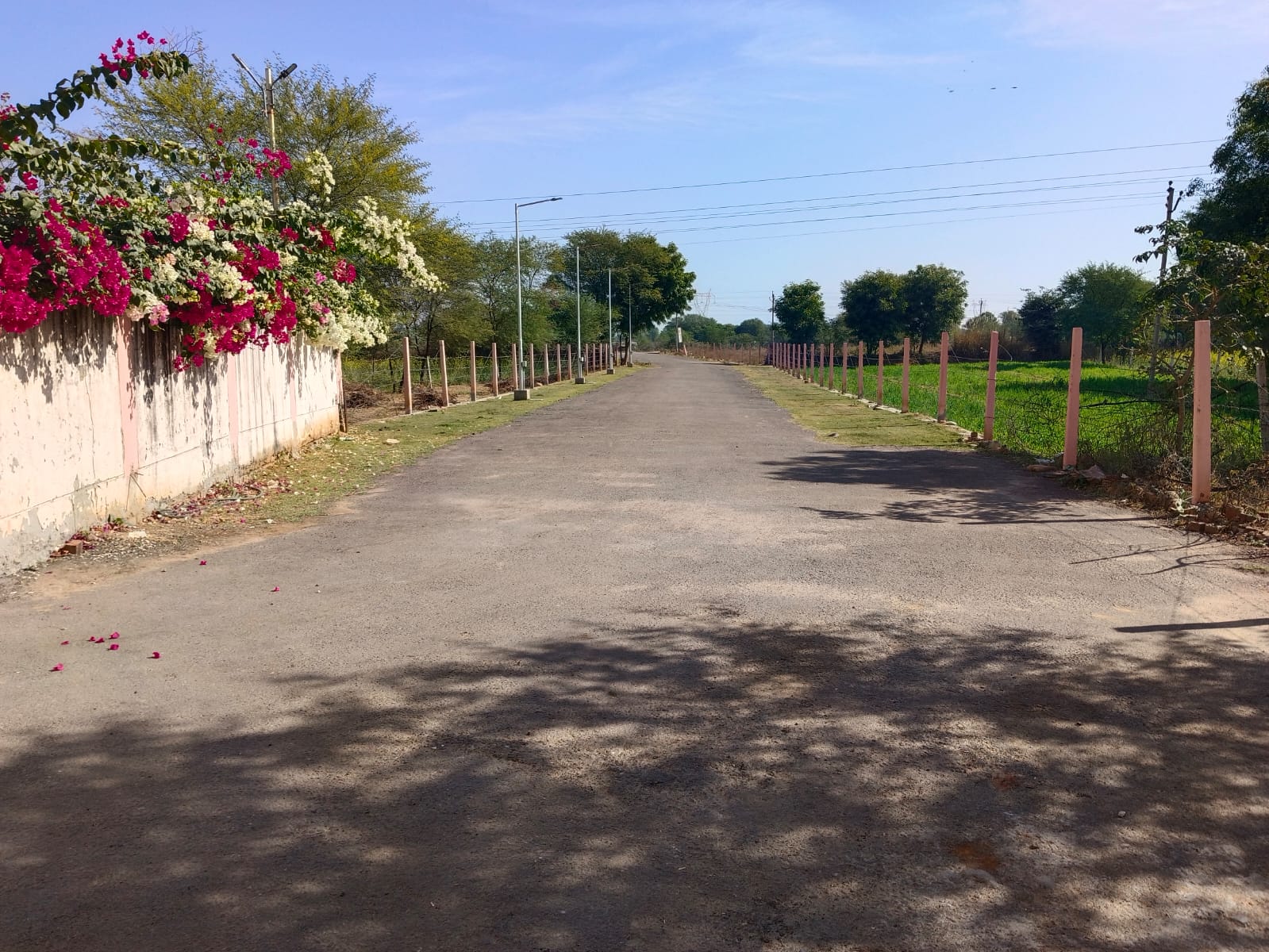 A plot of residential land measuring 2.13-Acre at Lucknow was purchased and registered in favour of IRWO on 19-11-2013. Building plans were submitted to Lucknow Industrial Development Authority (LIDA) for approval. After regular chasing, LIDA have conveyed approval of the building plans. Application for environment clearance was approved by the SEAC and environment clearance has been received. RERA registration number is: UPRERAPRJ8170. Tender for the work was finalized and work is in progress at site. Boundary wall and structure for the Community Centre have been completed. Foundation work is in progress for the DUs. The scheme has been reopened for booking with revised cost of units which has escalated due to delay in sanction by LIDA. Due to insufficient booking even after reduction in cost of DU’s due to Covid-19 and due to recession in Real Estate industry, the work is kept on hold at present. RERA registration number is: UPRERAPRJ8170.
Allottees List
Project Details

IRWO has purchased 12.86-Acre of land at Kota and project is planned in two phases. These are single-storied plotted row houses. In Phase-I, 64 DUs were planned. The contract was awarded in April, 2015 but had to be terminated on 07-09-2016 due to tardy progress of work. Fresh contract has been awarded. Contractor is progressing with DUs in new block E. External electrification work has been completed. External civil works have been nearly completed. RERA registration number is: RAJ/P/2017/496. Draw of lots for allotment of specific unit was done on 09-10-2018 and handing over of DUs has started. 32 possession letters have been issued and 29 DUs have been handed over. The scheme has been re-opened to blood relations of IRWO members, employees of Nationalized Banks, employees of other Government establishments and all Indian nationals for booking to fill up the vacancies. Plots have also been put on sale on “first come, first serve” basis for IRWO members and others. Two plots have been booked.
Allottees List
(a).Project Details (DU)
(b). Project Details (Plot Sale)

A plot of land measuring 3.24-Acre in Sector 37 of Jagatpura in Jaipur, approved by Jaipur Development Authority (JDA) for “residential use” was purchased and registered in favour of IRWO on 03-12-2013. Building plans have been sanctioned by JDA. 261 multi-storied dwelling units are to be constructed. Tender was opened on 05-08-2015 and work awarded on 27-11-2015. Structural works and brickwork of all the six buildings and construction of boundary wall have been completed. 81 units in blocks A & D and external works are completed. Fire NOC for A & D Blocks received. RERA registration number is: RAJ/P/2017/467.The scheme was re-opened for blood relations of IRWO members, employees of Nationalized Banks, employees of the other Government establishments and all Indian nationals. RERA registration number is: RAJ/P/2017/467.
Allottees List
Project Details

11.88-Acre of land was procured in the year 2004 and the housing scheme has been planned in two phases. In Phase-IIA, 140 dwelling units have been planned. Contracts were earlier awarded on two occasions but due to various reasons and court cases, the contractors could not complete the work and contracts had to be terminated. Fresh tender was awarded in first week of June, 2015 and the work has been completed. Electric power connection has been obtained. Connection for water supply and sewerage is complete. Draw for specific allotment of DUs was held on 02-06-2018 at Chennai. Results were uploaded on IRWO website. 130 DUs have been handed over.

In Phase-IIB, 161 dwelling units have been planned. Building plans were submitted to Chennai Metropolitan Development Authority (CMDA) in the month of May, 2015. A number of meetings and discussions were held with CMDA authorities for early approval of plans. In this regard, Member Staff had also written a letter to Chief Secretary, Tamil Nadu Government for early approval of the plans. Building plans for161 DU’s have been sanctioned by CMDA and Municipal Authorities. For the 9blocks, work is in progress at super structure level. All roofs have been cast. (RERA registration number is: TN/02/BUILDING/0195/2017). Community Centre building is 80% complete and is to be used by both Ph IIA & Ph IIB residents. RERA registration number is: TN/02/BUILDING/0195/2017.       .
.
Allottees List (II-B)
Project Details

A turnkey tender including transfer of land, for construction of single storied houses was opened on 17-03-2016. LOI issued on 28-06-2016 was accepted by the Contractor and turnkey agreement executed on 30-08-2016. Transfer, registration and mutation of about 1.9 Ha of land has been done in favour of IRWO. Issue of ‘chak’ road has been got finalized from the revenue authorities at Lucknow. Building plans and structural drawings have been approved by Moradabad Development Authority (MDA). RERA registration has been done under number UPRERAPRJ8575. Construction work of boundary wall has been completed. For 46 DU’s superstructure is complete and finishing is in progress. Allotment letters for 55 DU’s issued out of total 71 DUs proposed. RERA registration number is UPRERAPRJ8575.
1.Google Map
Allottees List
2.Project Details .

Sonepat is one of the largest group housing projects constructed by IRWO. There are 660 dwelling units and 117 EWS units. Buildings have been designed for earthquake resistant forces and fire-fighting installations have been provided as per the Haryana Government norms. Colony is provided with Solar Water Heaters, rain water harvesting and sewerage treatment plant (STP) with provision of recycling of waste water etc. The colony was given Gold Grading by State Environment Appraisal Committee (SEAC) for satisfying laid down parameters of water conservation, energy conservation and noise level control etc. So far 650 DUs and 25 EWS units have been allotted. 20DUs and 92 EWS units are not booked. Scheme was reopened for booking for all Indian nationals. Occupancy certificate has been issued by Directorate General, Town & Country Planning of Government of Haryana. Residents’ Welfare Association (RWA) has been elected and the maintenance handed over to them. Conveyance deed has been done by allottees for 353 DUs
Allottees List (PH-I)
Allottees List (PH-II)
Click here Project Details
Click here Project Details for EWS Flats

In Zirakpur, IRWO's Rail Vihar Project is located on VIP Road which is connected to chandigarh-Ambala Highway towords delhi, and is about 11 Km from Chandigarh Railway Station. The site has come up very well as good development has taken place in the nearby vicinity. This colony has come up very nicely. All the buildings are designed for earthquake resistance. Necessary provisions have been made for firefighting, rain harvesting, sewage treatment plant and recycling of waste water. Special emphasis has been laid on landscaping, horticulture etc. There are only three vaccant flats in Type-III(3BHK), The scheme is now open.
Total 399 DUs and 44 EWS units were planned in two phases. All the 195 units in Phase-I and 204 units in Phase-II have been completed. RERA registration number is: PBRERA-SAS79-PR0043.Completion certificate for the project received from the authority. Issue of Conveyance deeds already started. Draw for allotment of specific unit for Phase-I and Phase-II was held on 30-05-2015 and 17-10-2015 respectively. 44 EWS units are vacant. Scheme has been opened for all Indian nationals. Conveyance deed for 102 DUs already executed till date.
Allottees List (PH-I)
Project Details
E.W.S Project Details